Glass is a critical component of many machines, appliances, sensors, and optical components. When deciding whether glass is the right fit for a given application, or when selecting between multiple types of glass, manufacturers must consider optical properties alongside physical ones.

Optical properties—such as refractive index, absorption, transmittance, and dispersion—quantify and characterize glass’s interaction with light, and therefore determine how the material will perform in a given setting. Understanding optical traits is especially important when developing precision instruments for defense, medical, and scientific applications, although all manufacturers can benefit from understanding the performance characteristics of the materials they use.

As expert glass fabricators with nearly 100 years of experience, the team at Swift Glass can guide you through the material selection process for optical glass, including an application-specific consideration of core optical properties.

Refractive index measures a photon’s change in velocity as it moves through a given material. Mathematically, it is defined as the velocity of light in a vacuum (where photons travel the fastest) divided by its velocity in another substance.

Refractive index is a critical measurement, as it indicates the amount of light that gets transmitted through the glass, as well as the angle at which it exits. These values determine the focusing and dispersive power of lenses and prisms, respectively. Most varieties of glass have a refractive index of 1.5, meaning that light travels 1.5 times faster in a vacuum than in glass. However, both temperature and wavelength can influence refractive index, so these values should be considered in the context of each application.

As light moves through glass, some of the photons do not make it through the material. Instead, their energy is lost to absorption, which occurs when a photon’s energy is transferred to atoms in the glass. This absorption results in decreased light intensity from one side of the material to the other. The amount of absorption varies based on several key factors:

In some applications, such as darkrooms, high absorption is desirable. In lenses, however, absorption must be minimized. As such, absorption needs to be considered in context to be useful.

Dispersion differs slightly from the other optical properties above in that it focuses on wavelength separation rather than overall transmission or intensity. Dispersion is best understood through the example of a rainbow: different wavelengths move through water droplets at different speeds. Thus, what enters a humid atmosphere as white light separates into distinct bands of its constituent wavelengths, which we perceive as different colors.

There are three main types of dispersion that influence glass applications:

Material Dispersion
Different wavelengths travel at different speeds, with longer wavelengths moving faster than shorter ones. As a result, the light that moves through a glass transmitter will be separated by the different travel rates of light. This separation is called material dispersion.

Modal Dispersion
Modal dispersion is a form of wavelength separation based on the physical properties of the transmitter rather than the wavelength itself. This method of dispersion is often discussed in the context of fiber optics since the core of the fiber can transmit light faster than the cladding.

Chromatic Dispersion
Chromatic dispersion arises from a combination of material dispersion and modal dispersion. It specifically refers to the separation of wavelengths as they move through a transmitter. Manufacturers of optical equipment can use lenses with different materials and refraction indices to equalize differences in velocity and minimize chromatic dispersion.

All glass applications require a careful consideration of optical properties to ensure that components perform as expected. Differences in temperature and wavelength can dramatically impact optical performance, as can the cut and composition of the glass component. For optimal results, it is best to consult with glass fabrication experts that can help you choose the right material and component design to achieve your performance requirements.

As an ISO 9001:2015-certified and ITAR-registered glass fabricator, we uphold the highest quality standards for all our glass components, delivering premium results to customers across complex industries such as biomedical, appliances, optical, and aerospace, among others.

To learn more about the optical properties of glass and how they influence performance, download our eBook Understanding the Optical Properties of Glass. If you are ready to move forward with your premium glass solution, contact the team or request a quote today. 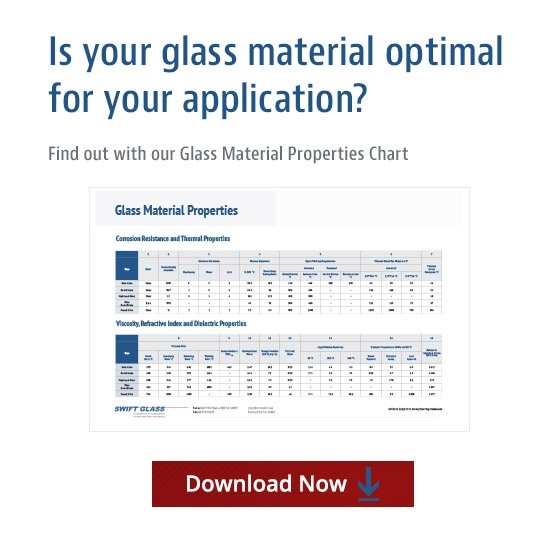